1ST APPARITION OF OUR LADY FATIMA 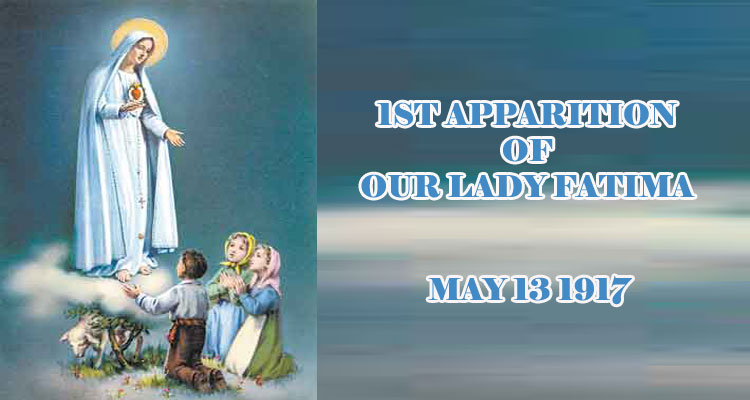 The three children were tending their sheep in a place called “Cova da Iria” when a flash of lightning drew their attention to a Lady standing on the top of a small holm oak tree. She was all dressed in white and more brilliant than a crystal glass filled with sparkling water, when the rays of the burning sun shine through it. The Lady told them that she was from heaven and that she would appear there on six successive months, on the 13th day of each month at the same hour. Lucia asked our Lady if they would go to heaven and the Lady replied that all three of them would go to heaven, but that Francisco had to say many Rosaries. Then, Our Lady asked the children: “Are you willing to offer yourselves to god and bear all the sufferings He wills to send you, as an act of reparation for the sins by which He is offended, and of supplication for the conversion of sinners?” When the three little Shepherds respond that they were willing to follow her request, she said: “Then you are going to have much to suffer, but the grace of God will be your comfort”. The Lady’s message for the children on that day was to pray the rosary every day during the war. Then she began to rise serenely, going towards the east, until she disappeared in the immensity of space. "

2ND APPARITION OF OUR LADY FATIMA 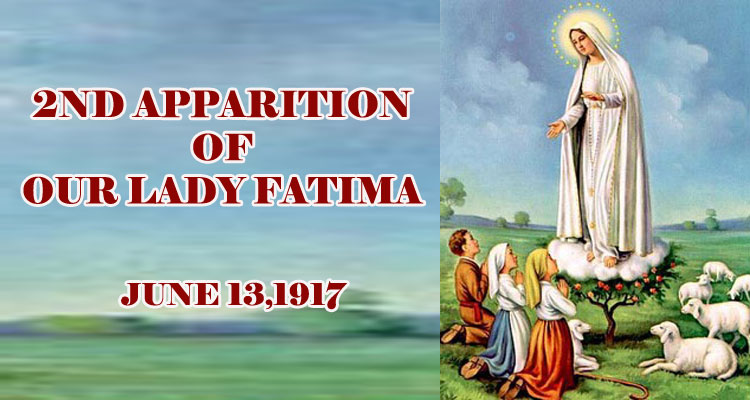 The children were again present with a number of other people and had finished praying the Rosary when the Lady, once again, appeared. She told Lucia should learn to read in order to fulfil her mission to do Jesus work on earth. When Lucia asked her if she would take them to heaven, Our Lady replied: “I will take Jacinta and Francisco soon. But you are to stay here some time longer. Jesus wishes to make use of you to make me known and loved. He wants to establish in the world devotion to my Immaculate Heart”. She consoled Lucia with the thought that she would be forsaken and that the Lady’s Immaculate Heart would always be there for her. Then she opened Her hands and communicated to the little children some rays of light. The children saw themselves in this light, as it were, immersed in God. Jacinta and Francisco seemed to be in that part of the light which rose towards heaven and Lucia in that which was poured out on the earth. In front of the palm of Our Lady’s right hand was a heart encircled by thorns which pierced it. It was the Immaculate Heart of Mary, outraged by sins of humanity, and seeking reparation.

3RD APPARITION OF OUR LADY FATIMA 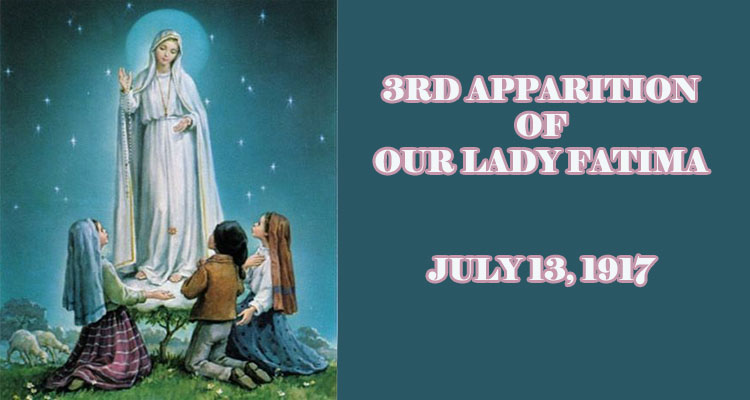 The word of the apparitions has caused a crowd to gather and about 4000 people were present when the Lady appeared with the words. The Lady promised to make known her identity and to perform a miracle for all to see in the future. She told the children: “Sacrifice yourselves for sinners, and say many times, especially whenever you make some sacrifices: O Jesus, it is for love of You, for the conversion of sinners, and in reparation for the sins committed against the Immaculate Heart of Mary”. Then, she opened Her hands and gave the children a vision of hell which awaited unrepentant sinners. The three little shepherds saw a sea of fire and plunged in this fire were demons and souls in human form, like transparent burning embers, all blackened or burnished bronze, floating about the conflagration, now raised into the air by the flames that issued from within themselves together with great clouds of smoke, now falling back on every side like sparks in huge fires, without weight or equilibrium, amid shrieks and groans of pain and despair, which horrified the children and made them terrible fear. The demons could be distinguished by their terrifying and repellent likeness to frightful and unknown animals, black and transparent like burning coals. That vision was captured, much later, by the celebrated artist Salvatore Dali in his famous painting “Vision of Hell”. The Lady told the children: “You have seen hell where the souls of poor sinners go. To save them, God wishes to establish in the world devotion to my Immaculate Heart. If what I say to you is done, many souls will be saved and there will be peace. The war is going to end; but if people do not cease offending God, a worse one will break out”. She also said: “To prevent this, I shall come to ask for the consecration of Russia to my Immaculate Heart, and the Communion of Reparation on the First Saturdays. If my requests are heeded, Russia will be converted, and there will be peace; if not, she will spread her errors throughout the world, causing wars and persecution of the Church. The good will be martyred, the Holy Father will have much to suffer, various nations will be annihilated. At the end, my Immaculate Heart will triumph. The Holy Father will consecrate Russia to me, and she will be converted, and a period of peace will be granted to the world”. Our Lady finished Her speech with the following request: “When you pray the Rosary, say after each mystery: O my Jesus, forgive us, save us from the fire of hell. Lead all souls to heaven, especially those who are most in need”. Then she disappeared.

4TH APPARITION OF OUR LADY FATIMA 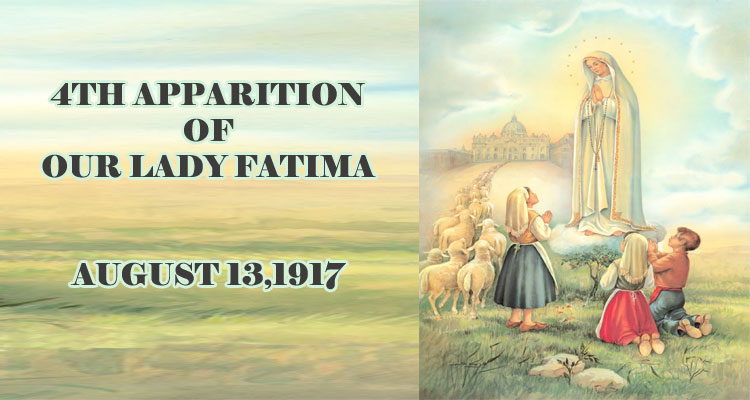 The news of the apparitions had reached the civil authorities and the children were under arrest by the regional administrator. This was in the context of the banishment of the Catholic Church by the civil authorities and followed an intensive effort by the Church authorities to suppress the children’s story. At one point the children were threatened by the civil authorities with being boiled in oil if they did not recant. They refused and offered to suffer the proffered punishment. The children were released after August 13th, and on August 19th, they, once again, saw the Lady at a place called “Valinhos”. At this time, Our Lady promised to make a miracle in the last month, so that all may believe. She told the children to take the money being left in the “Cova da Iria” by the people and to build a chapel. They were also instructed to continue praying for the conversion of sinners with the following words: “Pray, pray very much, and make sacrifices for sinners; for many souls go to hell, because there are none to sacrifice themselves and to pray for them”.

5TH APPARITION OF OUR LADY FATIMA 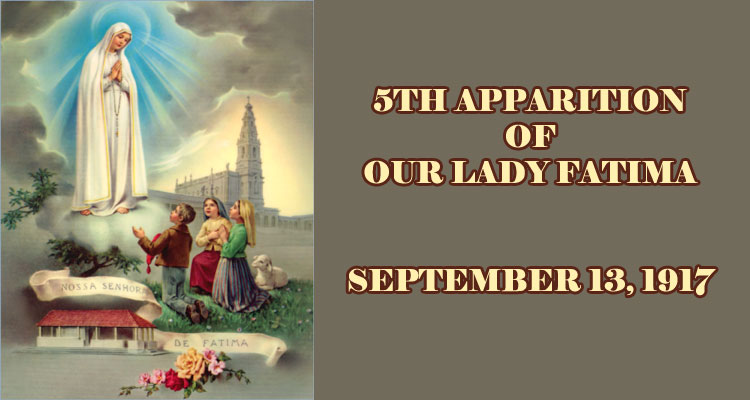 A crowd of about 30.000 people had gathered. Many people tried to reach the children, throwing themselves on their knees and begging the little shepherds to place their petitions before Our Lady. During the praying of the Rosary, Our Lady appeared and left the following message: “Continue to pray the Rosary in order to obtain the end of the war. In October, Our Lord will come, as well as Our Lady of Dolors and Our Lady of Carmel. Saint Joseph will appear with the child Jesus to bless the world. God is pleased with your sacrifices. He does not want you to sleep with the rope on, but only wear it during the daytime”. She also promised: “In October I will perform a miracle so that all may believe”.

6TH APPARITION OF OUR LADY FATIMA 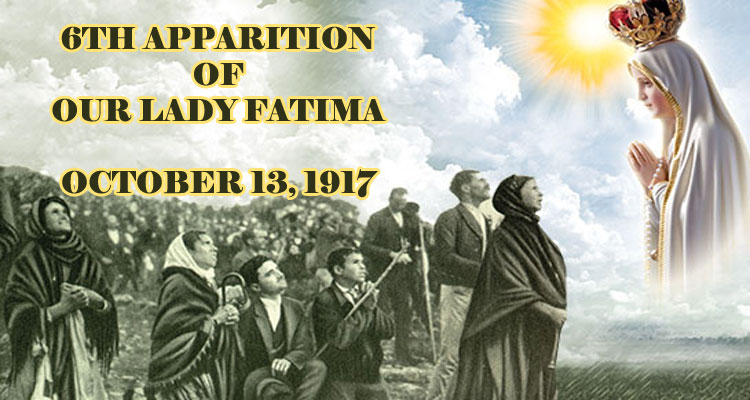 An estimated crowd of 70.000 people gathered in a rainstorm for the promised apparition. Among the crowd were many who did not believe and the members of the secular press who were there to report on the event. During the praying of the Rosary, Our Lady appeared and made Herself known as the Lady of the Rosary. She instructed the children to pray the Rosary every day and to build there a chapel in Her honour. She also said: “Do not offend the Lord our God any more, because He is already so much offended”. Then, She opened her hands and made them reflect on the sun, and as she ascended, the reflection of her own light continued to be projected on the sun itself. During the miracle of the sun, many present fell in the mud and water, believing that the end of the world was taking place. Many later reported that despite being covered in mud, they were dry and free of mud when they arose. Rose petals fell from the sky only to dissipate upon being touched by those present. After Our Lady had disappeared into the immense distance of the firmament, the children beheld St. Joseph with the Child Jesus and Our Lady robed in white with a blue mantle, beside the sun. St. Joseph and the Child Jesus appeared to bless the world, for they traced the Sign of the Cross with their hands. When this apparition disappeared, the children saw Our Lord and Our Lady of Dolors. Our Lord appeared to bless the world in the same manner as St. Joseph had done. This vision also vanished, making place for the vision of our Lady of Carmel.